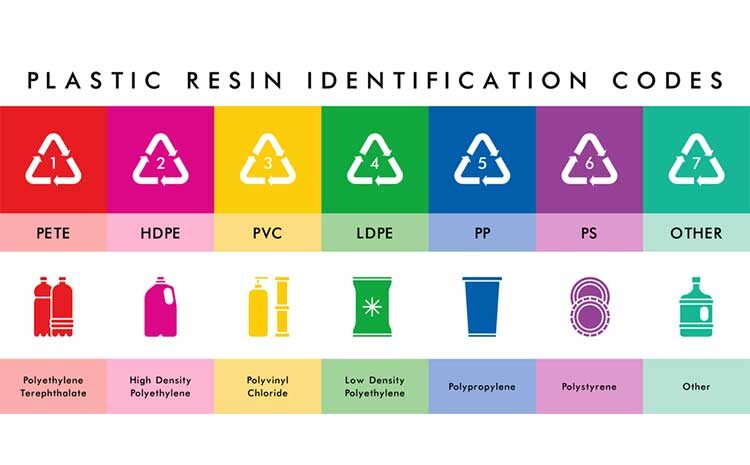 RIC is a uniform set of symbols that appear on plastic products. It is used to identify the plastic resin used to make the product. RIC is the abbreviated form of ASTM International Resin Identification Number. It was first developed by the Society of the Plastics Industry in 1988 and was adopted by ASTM International in 2008. The resin identification code of any plastic product can be found enclosed within a triangle of three arrows.

When it was first introduced by The US Society of the Plastics Industry, that is, the SPI, in 1988, it was referred to as the Voluntary Plastic Container Coding System. According to the Society of the Plastics Industry, the purpose of the code or set of signs was to provide a consistent national system to facilitate the recycling of post-consumer plastics. The system developed by SPI was then adopted by many other communities who had begun to implement recycling programmes. The purpose of such adoption was to make sorting plastics easier. The RIC system was designed to make separation and sorting in materials recovery and recycling plants easier. In order to get maximum value, different materials must not be recycled together. Quality control sorting should be done necessarily in order to get a homogenous batch for recycling. Plastics are sorted by their resin types and like materials are recycled together in order to make it easy to reuse them.

The SPI code was first developed in the US and later its variations were adopted for use in different countries like China, England and other European countries. SPI codes were especially important in the time when the awareness about recycling was just spreading and more people were trying to adopt it. In 2008, the SPI code was used as the standard for a new international system proposed by ASTM as an international standard- WK20632, Practice for Marking Plastic Products for Identification in Reuse and Recycling. Eventually ASTM D7611—Standard Practice for Coding Plastic Manufactured Articles for Resin Identification was issued. It was revised in 2013 to change the icon from three arrows in triangle shape to a triangle within which the RIC number would be shown.

The plastic resins represented by the Resin Identifications are given below:

Polyethylene terephthalate, abbreviated as PET or PETE is one of the most common thermoplastic polymers available today. It can be seen used in making clothing, packaging and so on.

Usually recycled in curbside recycling programmes. It is washed and melted down into its constituent components. Then it is used in the production of new polyethylene terephthalate resin.

High Density Polyethylene, abbreviated and commonly called HDPE is a thermoplastic polymer. It is also called alkathene or polythene in different contexts. It is a thermoplastic polymer made from petroleum. It is used in the manufacture of several common use products including different types of containers for things like shampoo and milk, cutting boards, and piping.

Curbside recycling, but not all products are picked. Collected products are sorted, shredded and melted down. They are then used to make pellets which can be used in manufacturing.

Polyvinyl chloride, or PVC is one of the most manufactured plastics in the world. Several million tonnes of PVC are produced each year. Polyvinyl chloride has two forms: rigid and flexible.

Fence making, flooring, pipes and other plumbing, curtains, furniture like chairs, toys and as construction material in rigid form.

Polyvinyl chloride has a very long shelf life which impacts the amount recycled each year. However PVC waste is collected and treated. Chemical and mechanical processes like pyrolysis are used to break it down.

Low density polyethylene is a thermoplastic polymer made from ethylene. It is produced by using free radical polymerization. LDPE is light weight, soft and flexible. It does not have great temperature resistance, but it is tough.

LDPE is first collected from consumers and waste dumps. After being sorted and separated, LDPE is shredded into flakes with grinders. In flake form, the plastic gets cleaned to remove dirt, contaminants and other debris. These are then dried, melted and turned into pellets for new manufacturing processes.

Polypropylene is a thermoplastic polymer produced from the monomer propylene. It is also called polypropene. Polypropylene is produced by the chain growth polymerization of its monomers. It is a polyolefin.

Used to make fibes, food containers, utensils and other dishware.

Picked up through most curbside recycling programs. Then it is put through mechanical recycling processes in order to segregate it from other types of plastic. Polypropylene is washed and grinded in order to make it small enough. It is followed by extrusion by heat and then it is used to make new plastic products.

Polystyrene is a synthetic aromatic hydrocarbon polymer. It is made from the monomer known as styrene and can be solid or foamed. Polystyrene is a hard, stiff, brilliantly transparent synthetic resin. It is widely employed in the hospitality and catering industry.

Polystyrene is usually incinerated. When it is collected for recycling, it is first sorted. Then it is compacted to reduce its volume and shredded. Then extrusion or melting is done.

Other plastics include acrylic, nylon, polycarbonate, polylactic acid, which is a bioplastic and multilayer combinations of different plastic resins.

Plastic lumber, glasses, shields, bottles and so on.

Number 7 plastics are produced in small volumes, so they are not recycled on a big scale.