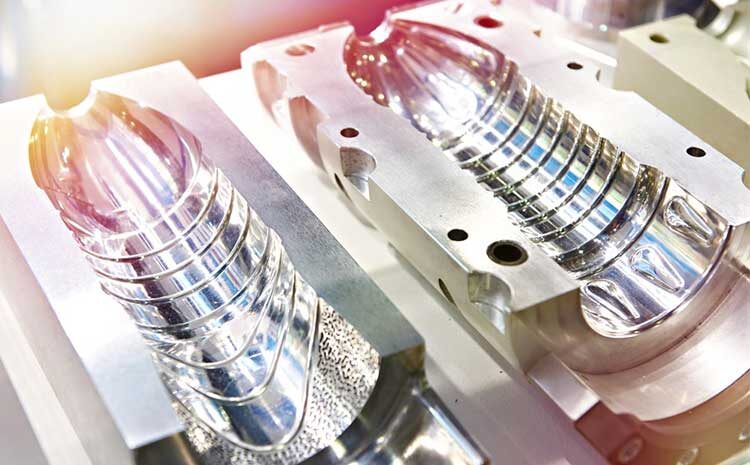 Blow molding is a commonly used manufacturing process through which plastic bottles are produced. The process is designed in such a way that it creates hollow parts for things like bottles. It is also used in several other industries. The blow molding process works by blowing air or any inert gas into a heated object. Usually this is the preform of the bottle, also called parison. This causes the heated object to expand, making a hollow within it. This is why the process is referred to as blow molding. After cooling and hardening, it can be used for various purposes. This is one way of making plastic bottles. Another one is injection molding.

Plastic blow molding process was developed from ancient glass blowing processes. Glass and plastic both can be molded to a desired shape by blowing air into it. Rubber too can be processed by blow molding. This method is so old that it dates back to the first century. The first blow molding machines were made in the 1930’s by Plax Corporation. In the late 1930’s, low density polyethylene was introduced to blow molding and since the commercialization of blow molding, the industry has grown exponentially.

The process of blow molding is quite simple. The process involves melting, extruding, blowing, cooling, ejection and secondary processes. This is the basic process and different manufacturers can add other processes like adding colorants, depending upon the purpose of production.

The first step in blow molding is feeding the plastic resin to the machine. Plastic resins, often in the form of pellets are sent to the extruder hopper. Vacuum pumps and compressed air are used in this process. The next step is the melting of the plastic resin. This is done by continuous heating and kneading. Heating is done by electric elements or heating bands. The third step is the extrusion of the plastic through the extrusion screw. In this step the parison or preform is created and prepared to be inflated. The preform is formed either by free extrusion or injection into a preform mold. Next, the preform is captured in a split die or metal mold. The ends of the preform are sealed, except for the opening of the container through which compressed air will enter. The next step is inflation. The product is shaped in this step. Air is pumped into the heated preform and it is inflated according to the shape of the mold it is in. The last step is the cooling process. After the product cools, the mold opens and the product is ejected. If excess material (flash) remains on the product, a rotating knife trims it off. Then quality control tests are done to see if there are any faults and faulty products are sent back into the process. Other secondary processes include labelling, marking and printing.

In extrusion blow molding, abbreviated as EBM, plastic is first melted by heating it. Then it goes through an extrusion machine. It is extruded into a hollow tube known as a parison. The parison is held inside a cool metal mold, after which air or inert gasses are blown into it. This causes the melted plastic to inflate into the shape of a bottle or container. After the newly inflated plastic bottle has cooled down at room temperature, the metal mold is opened and the hollow bottle is removed. Usually the extrusion blow molding process is done to make high volume plastic containers.

Injection blow molding is yet another type of blow molding. It involves the injection of the molten plastic material into a mold. The molten material is placed on a pin which is rotated around a molding station. The heated material then expands and after it inflates, the hollow container is formed. It is cooled and then removed.

Through these types of blow molding methods, different types of plastic materials can be molded into products. Many different types of raw materials can be used for blow molding. Blow molding is usually done with thermoplastic materials that are fairly heat resistant. It is used for the large-scale production of plastic bottles, so bottle grade plastic is the most commonly used material. Blow molding is also used in several other industries like transportation and construction. High density polyethylene, low density polyethylene, polyethylene terephthalate or PET, polypropylene, polyvinyl chloride or PVC, nylon and other polyamides, polycarbonates, acrylonitrile butadiene styrene, cyclic olefin copolymer, copolyester etc are some other plastic resins used in blow molding.